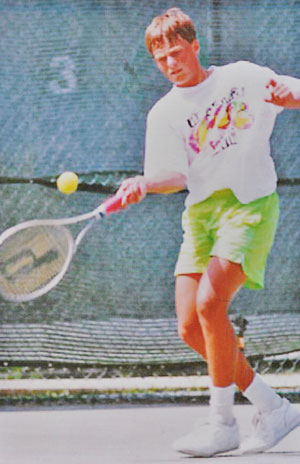 Blake McMeans grew up in Knoxville, TN and was one of the top recruited tennis players in the nation.  He was smart, driven, good looking, and was absolutely dominant on the tennis court, winning tournament after tournament.  He was recruited by numerous colleges but accepted a scholarship to play tennis at the University of Tennessee, his father’s alma mater.

On the night of November 10, 1994, his life changed forever.  Blake went out drinking and partying with his future fraternity brothers on the Knoxville strip.  He then got into his car to drive home. Just after 2 a.m. and only a half mile away from his house, Blake drove his car into an embankment, hitting trees along the way and flipping his car three times.

Blake was immediately airlifted to UT medical center, where doctors and surgeons fought to keep him alive.  For nearly four months, Blake remained in a coma. Because of his inability to make any significant physical and cognitive progress, his recovery seemed highly unlikely.  The damage done to his brain was significant. Despite the odds, Blake survived the initial trauma and began slowly relearning how to do everything all over again, including swallow, blink, lift his head, and say basic words.  He was absolutely determined to survive and he defied all medical odds.

Blake will tell you that his faith and determination kept him going.  He quickly realized that he would never play tennis again, but he believed God now had a much bigger purpose for his life.

Almost twenty-five years later, Blake continues to accept the challenge of working hard to improve physically, mentally and cognitively. He works out at the YMCA several times a week and continues to make small, steady gains in his motor development. The same fortitude that once made him a tennis star and the inner strength that allowed him to survive his accident is now being channeled towards another purpose: making a difference in the lives of others.

Through his nonprofit, the Blake McMeans Foundation and Promise Tour, Blake travels and educates high school students, young adults, and many others about the dangers of drinking and driving in hopes of preventing them from making the same life-altering mistake. He is spreading his message far and wide to tens of thousands of students across the region, encouraging them to make a promise to never drink and drive.

Blake McMeans is now one of the true champions against drinking and driving in the state of Tennessee.  He recognizes that life is full of decisions, and decisions have lasting consequences.  The decision he made back in 1994 changed his life forever.  Through his faith and fortitude, Blake is using his own tragedy to inspire and motivate others.  As Paul writes to the Romans: “Suffering produces endurance, and endurance produces character, and character produces hope, and hope does not disappoint.”  Blake McMeans is keeping hope alive.  Tonight, he will speak in Nashville at his major fundraiser held at the Hutton Hotel, raising support in order to continue traveling and spreading his message to young people who need to hear it.  What was once viewed as a tragedy has now been transformed into a remarkable story!