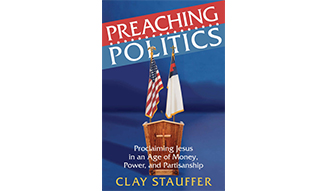 In the spring of 2016, I published a book titled “Preaching Politics: Proclaiming Jesus in an Age of Money, Power, and Partisanship.” The book resulted from significant research on the intersection of faith and politics, paying special attention to the moral foundations of liberals and conservatives, the spiritual challenges of unbridled consumerism, and asking whether the love of Christ has the ability to overcome deep partisan and ideological divides. I concluded that it does because I have seen it happen often, although there are days when I grow discouraged.

The current political climate in our nation is toxic. It is divisive, ugly, violent, and this election cycle will be exhausting. Racial tension, inequality, a health pandemic, unemployment from a shutdown, issues with law enforcement, tearing down historical monuments, awkward photo ops with Bibles, and establishing “autonomous zones” in the middle of American cities only fan the flames of division and resentment.

As we rapidly approach the two hundred and forty-fourth birthday of America, how do we understand the complicated relationship between religion, politics, and morality?

Many view their faith solely through a partisan lens but that’s actually backwards. For Christians, politics should only be approached through the lens of faith and morality. Christians should address the issues of the day by looking to the example and work of Jesus, what he did, said, and modeled.

President Abraham Lincoln, when referring to the Union and Confederate forces in his Second Inaugural address, famously said, “Both read the same Bible, and pray to the same God, and each invokes his aid against the other.”

Christianity has produced the likes of Al Sharpton and Jerry Falwell, Jim Wallis and Jimmy Swaggart, Walter Raushenbush and Robert Jeffress. Are they reading the same Bible, and praying to the same God? How do we make sense of the broad political divide that exists within the Christian tradition?

In The Righteous Mind: Why Good People Are Divided by Politics and Religion, NYU professor Jonathan Haidt says, “Morality binds and blinds. It binds us into ideological teams that fight each other as though the fate of the world depended on our side winning the battle. It blinds us to the fact that each team is composed of good people who have something important to say.”

There is a lot of “binding and blinding” that is going on right now. The media thrives on conflict, division, and wants us to pick a side. Do you love Trump or hate him? Do you believe that black lives matter or are you racist? Can you support the police or do they need to be defunded? Must capitalism be unrestrained or can we choose to build a more inclusive economy?

Make no mistake, tensions are high. People are scared, angry, or a bizarre combination of both. Our Founders wrote that “All men are created equal and are endowed by their Creator with certain Inalienable rights, among those life, liberty, and the pursuit of happiness.” Many have pointed out the irony: “How could they write those words while still owning slaves?” Fair question.

It took almost a century for the civil war to end and another century for civil rights legislation to finally become law. We all must continue to do our part today to make this a more perfect union for all people regardless of color, class, or creed. Listening is a good place to start. Christians should begin with the basics: love God and neighbor; treat others the way you want to be treated; forgive often; share what you have; be humble; show hospitality; feed the hungry, visit the sick; look after the widow and orphan.

Do we live in a great country? Yes. Is it perfect? No, and it never has been. Therefore, we keep working together. Or to use Alex de Toqueville’s words, we recognize that “the greatness of America lies not in being more enlightened than any other nation, but rather in her ability to repair her faults.”